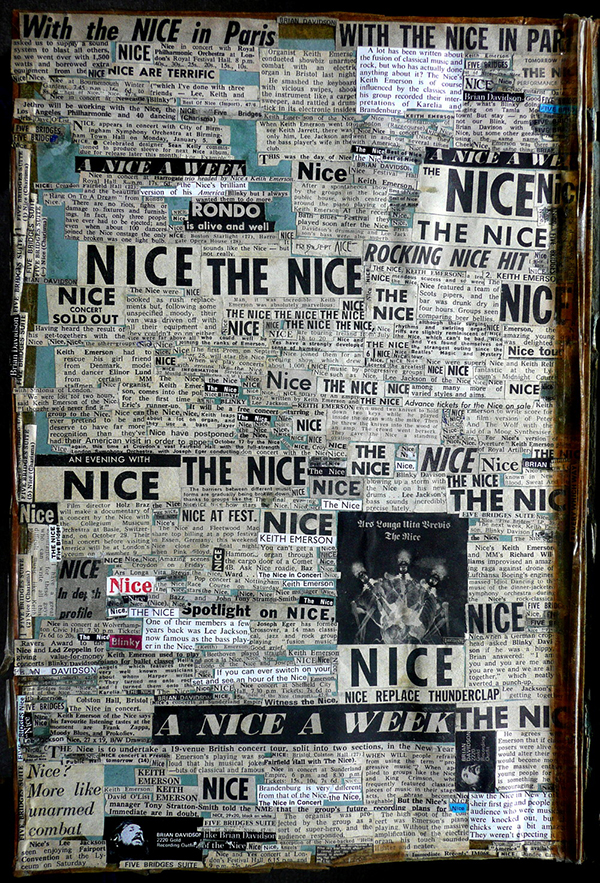 A while back, I had an exchange of emails with an original fan of the Nice (and ELP) who had some amazing archives. In the end, we decide it was easiest for him to scan them and send me files. After too long a gap, I’ve finally got round to assembling these into a PDF – I was going to set up a gallery on this site, but I have too little time & energy these days, so enjoy & thanks for sharing Geoff!!

Geoff writes: I was/am a huge Nice fan, having seen them on the first Hendrix tour and many many times after that. I have several thick scrapbooks that I collected over the years with anything to do with The Nice and also the various offshots from The Nice, obviously mainly ELP. I have both the Nice’s and ELP’s autographs along with ticket stubs and some original photos that I bought from The Nice’s fan club (well Information Service) based in Battersea and run by Mary Jenkins at the time. I used to buy every pop magazine going to collect any photos, newspaper cuttings and news of what the band were up to. I have literally hundreds of interview clippings. I am 68 now and wondered if all the clippings etc I have collected over the years are useful to anyone?

I found another bag full of clippings, though it’s all of ELP, Every which way, Refugee and Jackson Heights stuff, but regarding the two Nice ticket stubs, they were in a large brown envelope with some posters. Can you believe it they’ve been shredded by mice, no doubt from a previous house we knew to have a mouse problem. (We moved four times in 6 years). I had some great posters that have really been attacked (we obviously weren’t feeding them enough!) mainly of Emo. Some posters must be almost 3 feet in height but now have a few holes in them. I found the autographs of Jackson Heights and Every which way, which I can’t remember even having. There’s a lot of stuff that needs actually sticking into scrapbooks that at the moment is just loose in a large hessian bag that has also been nibbled. I did have a recording that we did of The Nice at the Colston Hall, Bristol on their last tour, that we sneakily did on one of the first cassette players back then. It’s now on a reel to reel tape somewhere. I don’t know if I even still have it as I had rather a lot of tapes and I know I had to get rid of a lot of stuff when moving. I remember it wasn’t a great recording because my mate who was doing it kept jiggling his legs up and down in time with the music as he couldn’t help himself from not getting into the show!